COMING NEXT SUMMER, author RJ Smith, an investigative journalist, screenwriter and author of horror, suspense and action will release his new mega-thriller based on science. In October 2000, the BBC transmitted “Mega-tsunami; Wave of Destruction”, suggesting a future failure of the western flank of Cumbre Vieja would cause a mega-tsunami. Its hypothesized that during an eruption the western half of the Cumbre Vieja will catastrophically fail in a massive gravitational landslide and collapse into the Atlantic Ocean, generating a mega-tsunami. 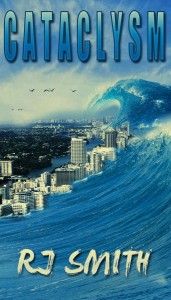 Computer modeling indicates the initial wave will attain HEIGHTS in excess of 2,000 FEET and peak to 1-MILE traveling at 620 mph — approximately the speed of a jet aircraft. This will inundate the African coast in an hour, the southern coast of England in 3.5 hours, and the eastern seaboard of North America in 6 hours.

The initial wave will subside into a succession of smaller waves, each about 100-200 feet high.

In his second uber-commercial, INTERNATIONAL thriller, RJ Smith takes his audience on a whirlwind ride of seat gripping terror during what might be the end of life for many.

Rooted in reality, the story follows SAMUEL MAY as he strikes an alliance with the international community to try and save as many people as possible.

THE FIRST SIGNING OF 2013
Scroll to top