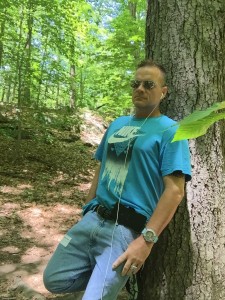 The Master of Suspense

Oh, God, I feel good. That’s not to be confused with a total state of happiness… peace and harmony is another thing entirely. It is mid August 2015 as I tap out this flow of mindful, deliberative thoughts to my fans and friends around the globe.

The heat has been horrendous this year; the sweat glistens on my skin following moments out in the beaming elements.

Perhaps Global Warming is sending us all on a journey of disaster.

I am three months post recovery from surgery that repaired the damage to my shoulder incurred during that bike accident. With the reattachment of a bicep tendon and repairs of tears in my rotator cuff, the ongoing rehabilitation has been painful and long. But the good news is that the operation was successful and I am feeling a lot better every day.

The last 26 months have certainly been challenging, but I have always prided myself on pushing through adversity, overcoming obstacles and climbing back from tragedy. 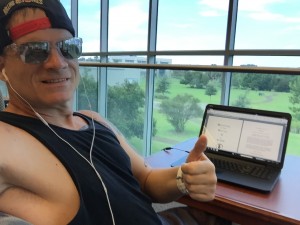 That’s where I find myself right now. With severe neck and shoulder surgery in the rear view mirror, I am coming back. That’s not to say I haven’t lost a lot; I have. Depression has been great in the knowledge of how great that loss really is to my career.

Artists work hard at their craft, working many years, in the hope of making it to the main stage.

That break came to me in late 2012, and I was excited beyond anything to realize in fall 2013 I would go on an international book tour for my first novel, The Santa Claus Killer. But sometimes fate has something to say about it. Then, sometimes, the recklessness of others ruins everything. Many of you have contacted me, bewildered that the company responsible for my injuries has not accepted responsibility. It’s true Ajax Paving Incorporated has certainly not paid my medical bills or done the right thing by me and my family. A reckless company to be sure, I am just another victim in a long line of people who have been severely hurt by their destructive practices.

I am leaving that up to a fine group of lawyers to handle. 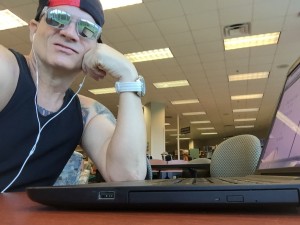 As for me, and the reason why you all come here, let me say this: After two years of surgery and rehab, I am now able to sit at my computer and write a little every day. It’s not at the level that I once enjoyed; I can’t sit here for five hours daily and turn out the manuscripts like before the accident. I no longer have the backing of investor money for tours; all of the events have been cancelled.

That’s just something I am going to have to learn to live with.

But I have been able to develop and create something, and that’s refreshing. The long months and hours away from the computer have given me a lot to think about…. life, it’s shortness and the fact that time continues marching despite what any of us think.

To that end, my work in progress, Mountain Monsters, has been renamed with the Publishing title of Monsters In The Woods. Although I have quite a clip of development and writing yet to do, the manuscript is coming along nicely. The characters are forming, interacting finely and pushing the story through a well thought out path. I suppose this one may best be described as Harry Potter meets Swamp Thing.

This book was supposed to be done eighteen months ago, and I am blessed to have great people around me. From my US Agent, Joyce Keating, who insisted I take the time to heal, to Editor Glenda Findley whose words keep me focused. Just the other day, I spoke with my UK Representative, Mr. Robert Snow, possibly the most upset about my accident. But despite the hard work I have had to undergo to fight through these last two years. they have all stuck by me no matter what.

Sure, I have lost investors and retailers, but the core group of people around me have been nothing but supportive.

Monsters In The Woods is something I’ve been thinking about for my entire life. We all remember being young and fretting the Boogieman hiding in the dark closet… back behind the swinging hangers. Many check under their beds before crawling in for a good night’s sleep. I used to pull the sheets up over my head, believing that somehow that would keep me safe. Tales of monsters are ingrained in the young, just the same as Santa Claus and the Easter Bunny. We thrive on the tales, pushed around summer campfires and camp.

Childhood would be nothing without the fright-fests we dream into existence. For me, as I grew into my thirteenth birthday at The McQuade Foundation for Boys in New Windsor, New York, we’d all be scared shitless about a race of reptilian monsters that we believed took up residence in the woods.

There were stories every summer, and sometimes in winter. If a tree branch hit the window, the kids would know for certain what was out there in the darkness. Those memories of creatures, hunting our young bodies has stayed with me through the course of time.

A few months back, I was able to visit the place where I grew up. I walked those same woods that brought fear to my then young mind, I crept along the same dirt and leaf strung paths, touched the secret tree where my friends and I carved our initials, and recalled everything about the tale of the Monsters in the Woods that we conjured when the boredom came rushing in.

So this is me, picking myself back up off the ground, brushing off the injuries and moving into the future. I have  a coalition to build all over again, and I’ll be damned if I’ll let a few injuries stop my course through history.

Thus, every day, I wake from my dream and hobble over to the keyboards. There is a book to write… a story to tell, and there isn’t any other way I know… other than to write it all down and send it to my agents for publishing.

The Monsters In The Woods